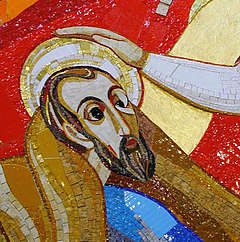 Some of the Fathers of the Church lived or were from Syria, including Saint John Damascene. Archeology reveals that Marian devotion in that region goes back to the patristic era. It is now a Muslim majority country, with only a minority of 500,000 Christians of Greek-Orthodox, Maronite or Roman Catholic rites.

Syria is home to the important Christian shrine of Saydnaya, 25 km from Damascus. Its church and monastery, containing valuable manuscripts and icons, date from 547. Saydanya receives a very large number of visitors each year, and ranks only second after Jerusalem in the Middle East as a sacred destination. Miracles are reported.

We must also mention Soufanieh, where the visionary and stigmatist Myrna receives miraculous olive oil and shares a message from heaven for the unity of Christians and inter-religious dialogue. The investigation is ongoing.

Syria has a great number of ancient Christian buildings, inscriptions and mosaics evoking the Virgin Mary.

The Fathers of the Church and Syria

One cannot speak of Damascus without mentioning Saint Sophronius and Saint Andrew of Crete who were born there, as well as Saint John Damascene who was bishop there. All of them wrote beautiful texts about Mary.

Saint Sophronius, a native of Damascus (ca. 560) and patriarch of Jerusalem from 634-638, spoke of Mary in admirable terms.

Saint Andrew of Crete was also born in Damascus (ca. 650).

Saint John Damascene, a native of Damascus (ca. 675), was an eloquent defender of icons, because of the mystery of the Incarnation. He was also a great theologian of the Assumption of Mary. Reading his meditations are akin to visiting a cathedral!

Saint Ephrem the Syrian was born in the city of Nisibis (now Nusaybin in Turkey), and he then settled in Edessa (also in Turkey, near the present Syrian border). He wrote magnificent hymns to the Virgin Mary. We mention him in the "Turkey" section of "Mary Fills the World" and in the "Great Marian Witnesses" section.