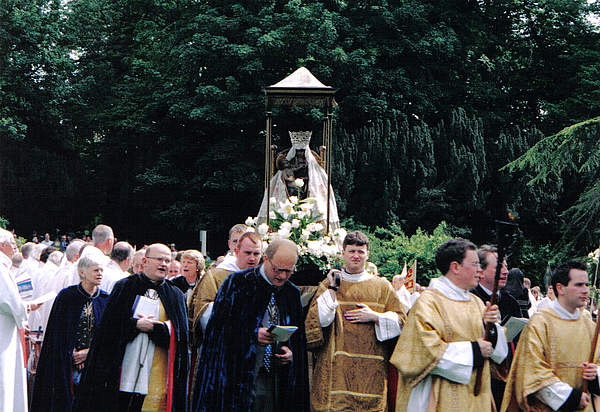 Walsingham has been a place of pilgrimage for centuries. The shrine is for everyone - every person, every age, every outlook, every need.

Lady Richeldis de Faverches was a Saxon noblewoman, married to the Lord of the Manor of Walsingham Parva. He died leaving her a young widow with a son, Geoffroy.

In 1061, Richeldis was rewarded by her life of prayer and good works. She was taken in spirit to Nazareth and asked by Our Lady to build a replica, in Norfolk, of the Holy House of the Annunciation.

This was done. And the Holy House attracted large gatherings of pilgrims, in an atmosphere of holiness and prayer.

Geoffroy built a Priory for the Augustinian Canons beside the Holy House in 1150. The pilgrimage developed and chapels were built on the way to Walshingham. The last chapel, the closest, is the Slipper Chapel. Many pilgrims stopped and removed their shoes (or slippers) before walking the last mile barefoot.

A never-forgotten Shrine, rescued after 400 years of abandon

King Henry III was the first monarch to visit the shrine. Many kings and queens came several times during their reigns. Edward I is recorded as coming 11 times. The last king to visit was Henry VIII. The Shrine and the Priory Church were destroyed in 1538, after King Henry VIII had broken communion with Rome when the Pope refused to bless his new marriage cancelling the previous one. In the course of time, the Slipper Chapel was used as a barn, a cow byre and a workhouse.

Anglicans and Catholics gather together around the House of Nazareth

In 1896, Charlotte Boyd, a former Protestant converted to Catholicism, bought the Slipper Chapel and gave it to Downside Abbey. In 1897 Pope Leo XIII re-founded the Ancient Shrine of Our Lady of Walsingham in King's Lynn. In 1922, the statue Our Lady of Walsingham was enshrined in the Anglican Parish Church.

On August 15, 1934, Mass was said in the Slipper Chapel. Four days later, Cardinal Bourne (Catholic) led a pilgrimage of 10,000 people and declared the Slipper Chapel the Roman Catholic National Shrine of Our Lady. In 1938 the Slipper Chapel and the Holy Spirit Chapel were consecrated by Bishop Youens of Northampton. In 1950, a temporary Catholic Church dedicated to the Annunciation was built in Walsingham. Before a crowd, variously estimated between 10,000 and 20,000 the Papal Delegate, Archbishop O'Hara crowned the new Statue of Our Lady of Walsingham on August 15, 1954. In 1968 The Catholic Shrine was entrusted to the Marist Fathers.

Currently the "House of Nazareth" is a place of reconciliation between Catholics and Anglicans:

In 1982 the Statue of Our Lady of Walsingham was taken to Wemblay to be venerated by Pope John Paul II. During his British visit, the pope gave a series of homilies on the Sacraments, the cornerstones of our Christian Life. In his homily on Baptism (May 29, 1982) the Holy Father made reference to Our Lady of Walsingham:

Our society needs to recover a sense of God's loving presence, and a renewed sense of respect for his will.

Let us learn this from Mary our Mother. In England, "the Dowry of Mary", the faithful, for centuries, have made pilgrimage to her shrine at Walsingham. Today Walsingham comes to Wembley, and the statue of Our Lady of Walsingham, present here, lifts our minds to meditate on our Mother. She obeyed the will of God fearlessly and gave birth to the Son of God by the power of the Holy Spirit. Faithful at the foot of the Cross, she then waited in prayer for the Holy Spirit to descend on the infant Church.

It is Mary who will teach us how to be silent, how to listen for the voice of God in the midst of a busy and noisy world. It is Mary who will help us to find time for prayer. Through the Rosary, that great Gospel prayer, she will help us to know Christ. We need to live as she did, in the presence of God, raising our minds and hearts to him in our daily activities and worries.