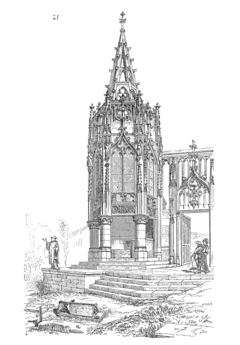 Avioth, a small village and a large basilica

Avioth (103 inhabitants) is located in the French department of the Meuse. This small village is adorned in quite an unexpected manner with a wonderful Gothic basilica built between 1250 and 1400. The interior is decked with beautiful ornaments, but on the outside is where the most surprising attribute is to be found: “The Receiveress” (The Welcoming One).

"The Receiveress" is a very unique monument, and its life-size reproduction exhibited in the French Museum of National Monuments in Paris. This Gothic masterpiece was probably built on the site of its discovery, where a miraculous statue was found “on a bush of thorns.” It replaced an earlier, more modest oratory. At the beginning of the fourteenth century, when the statue of Our Lady Avioth was taken inside the church, another statue of the Virgin took its place to welcome pilgrims on behalf of the original statue of Our Lady of Avioth. This statue has been called “The Receiveress” (The Welcoming One).

Avioth, situated on the border of Belgium, owes its very existence to this pilgrimage. According to tradition, shepherds discovered a statue of the Blessed Virgin Mary in a thorn bush. A shrine was built during the second part of the eleventh century on the site of the discovery, perhaps under the influence of the Cistercians of the Abbey of Orval nearby. Pilgrims coming to venerate the statue of the Virgin became so great in number that the modest shrine quickly proved to be too small. A new church was built during the second half of the thirteenth-century.

We do know a few details about the origin of the church and the history of the pilgrimage thanks to a manuscript entitled, “Brief statement of the state of repairs of Our Lady of Avioth Church written in the year 1668 by Mr. Jean Delhotel, humble pastor of Avioth.” The priest wrote, “I have learned from my ancestors, who had themselves accepted it as a pious tradition, that this image, one of the greatest known among the miraculous images of the Blessed Virgin, was built by angels sent from heaven down to the earth and set where it still occupies a place of honor in this church of Avioth, under a delicately carved pyramid.”

The manuscript contains reports of alleged miracles, most of which have precise dates: serious accidents without consequences, extraordinary releases of prisoners, or cures of serious diseases such as cholera. But most importantly, Father Delhotel expressed the role of the Virgin to provide temporary respite for stillborn infants who died without baptism.

Our Lady of Avioth, Shrine of Temporary Respite

According to popular belief in some provinces, temporary respite is when a stillborn child returns to life for the lapse of time needed in order to confer baptism before final death. Thus, having been baptized, the child may enter paradise instead of wandering in limbo where he would be deprived of the vision of God.

Parents brought stillborn infants to the shrine in baskets from far and wide. Whatever the season, the couple would stand in bare feet on the cold stone pavement in front of the statue of the Blessed Virgin holding their lifeless baby in their arms. The entire village, called by the church bells, prayed for the deceased. They sang the Salve Regina, then the Litanies in honor of the Virgin. Some parents had Holy Mass celebrated, confessed, and took communion, “in order to more effectively sway the Virgin Mary into getting grace and mercy from the Son of God, for the great consolation of these little children.”

Then signs of life appeared, "the movement of the veins in the members would return, their blood turned from the color black to red, and bloodletting or a hot sweat occurred," wrote a journalist. In the presence of these symptoms, baptism was given under certain conditions, "If you are alive, I will christen you ..." Immediately afterwards death returned and the child was buried on the eastern side of the church.

The secular pilgrimage of Our Lady continues to this day. Each year on July 16th many inhabitants of the region as well as Belgians and Luxembourgers come to pray and participate in the procession. In 1993, Pope John Paul II acknowledged the importance of the pilgrimage by giving the church the title of basilica.