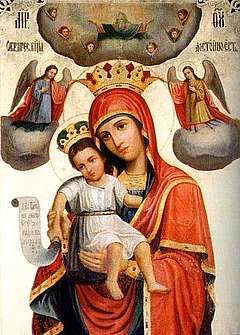 Mount Athos is a rocky mountain on a peninsula of northern Greece with bold cliffs rising to a height of some 6,000 feet (though land-linked, it is accessible only by boat). It is dotted with many shrines and for this reason has been named the "Garden of the Virgin."

The monastic community sings the Akathist hymn, and carries the icons that they make themselves in procession.

The Virgin with Three Hands is the most famous. Tradition attributes it to Saint John Damascene, in gratitude for having been healed from a severed hand cut by an iconoclast.

The Axion Estin icon ("He is worthy") is regarded as the Patroness of Mount Athos.

In the small chapel of the Vatopädi monastery, where the monks take their vows, is a painting of the Panaghia Paramythia: the Advocate or Comforting Virgin. [1]

I met people of diverse religions, and I grew up in an ecumenical climate, interested not only in Christians but also in the Orientals, the Indians, and the Chinese. My education was really open to everything. I was searching for a place to listen to God, away from the cultural bombarding of our time. Mount Athos polarized my aspirations. Once there, I was first sensitive to the natural beauty of the place, nature respected by man, wild and pristine. It is not by mere chance that Mount Athos is called the "Garden of the Virgin." The valleys and mountains, the paths all give a sense to life as a journey. Vocation is a journey of the spirit. It is Mount Sinai. Traveling without seeing the road. Living according to the sun, being received with welcoming and sacred hospitality...

Legend says that the Virgin was traveling with the apostle John on the Aegean Sea. A storm forced them to land at Mount Athos. The place was so pleasing to the Virgin Mary that she asked her Son to finish her life there. This is why the place is called the "Garden of the Virgin." No woman is permitted to come here, except the Virgin Mary (all'infuori della Vergine).

When a pilgrim passes someone along a path, he greets his neighbor by these words: "May the Virgin be with you, may she protect you, may she save you from dangers"... [2]