In Vietnam, Our Lady of La Vang 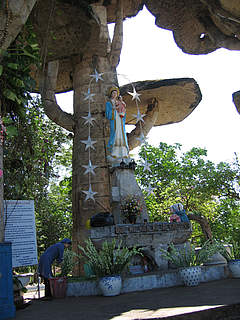 In 1798, Christians were forced to flee into the jungle to escape government persecution. At this time a series of apparitions of the Virgin Mary took place: Our Lady came to comfort and support them. Since then, there has been a constant stream of pilgrims to the shrine of La Vang, midway between the south and the north of Vietnam.

No reliable written source reports these apparitions. Only an oral tradition states that in 1798, in the middle of the country, 37 miles from Hue, in a wooded area, the Virgin accompanied by two angels "appeared" to a group of persecuted Christians. "She was wearing a beautiful, oriental style cloak, holding the Infant Jesus in her arms," a witness said. "She simply stood on the grass, like a mother with her children... She asked everyone to be happy to be suffering for their faith." She said: "I have already granted your prayers. Now all those who pray to me here in this place will have their wishes fulfilled." According to some, the Virgin appeared several times. Allegedly a number of cures and conversions have occurred at the shrine.

A special pilgrimage and a tradition of prayer have continued for two centuries. In 1886, a small chapel was built on the site of the apparitions. In 1901, a church was built and blessed in the presence of 12,000 pilgrims. On this occasion, Our Lady of La Vang was declared the protectress of the Catholics in Vietnam. The church was enlarged in 1928. A national pilgrimage is organized every 3 years.

In 1962, Pope Saint John XXIII elevated the church to the rank of minor basilica. Unfortunately, it was destroyed during the war, in 1972-1975.

On June 19, 1988, Pope Saint John Paul II canonized 117 Vietnamese martyrs and recalled the existence of the ancient shrine. He expressed his wish for its reconstruction, "in a climate of freedom and peace, and of gratitude toward she whom all generations call blessed, so that this shrine might boost national unity and the moral and civil progress of the country."