Our Lady of Guadalupe in Mexico 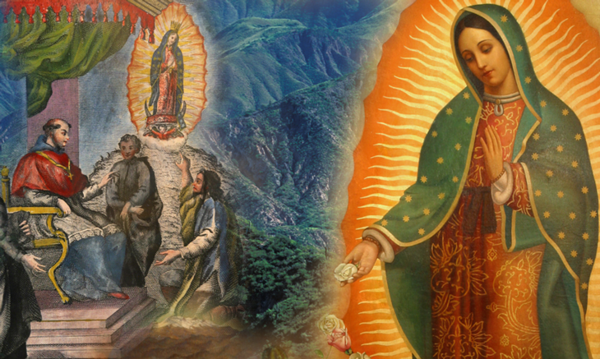 In Mexico, 14 million visitors each year to the shrine of Our Lady of Guadalupe make it the second most visited Catholic sites in the world, after the Vatican.

Every year, on December 12, the anniversary date of the apparitions of the Virgin Mary to an Indian peasant named Juan Diego, 4 to 5 million people flock to the streets of Mexico City, converging in pilgrimage towards the north of the city, on their way to Tepeyac, where the apparitions took place in 1531.

After his first visit to Mexico in January of 1999, Pope John Paul II, aged 82 and in poor health, went back to that country on July 30, 2002. The following day, he canonized the Indian Juan Diego Cuauhtlatoatzin (Loving Eagle), a Christian convert to whom the Virgin of Guadalupe appeared in December 1531.

In 1521, the capital of the Aztec civilization fell under the armed forces of Cortez. Less than 20 years later, nine million habitants who had professed a polytheist religion for centuries and extolled the virtues of the most cruel human sacrifices, converted to Catholicism.

In fact, each year the Aztecs performed at least 20,000 human sacrifices - men, women and children - for their blood-thirsty gods. In 1487, during a 4- day ceremony on the occasion of the consecration of a new temple in Tenochtitlan, some 80,000 captives were slaughtered in human sacrifice to the blood-thirsty snake god Quetzalcoatl...

What happened at that time to cause this unbelievable conversion, without historical precedent?

In 1531, a "Lady from Heaven" appeared to a poor Indian in Teypeyac, on a hillside to the north of Mexico City. She introduced herself as the Mother of the True God, and gave Juan Diego instructions to ask the bishop to have a church built on the very spot of the apparition. She left an image of herself miraculously printed on his tilma.

A tilma is a very plain garment made of cactus fibre that would have normally deteriorated within about 20 years. Today, more than 470 years later, it shows no sign of deterioration and the origine of the image it bears still defies all scientific explanations.

Apparently, the eyes of the Virgin even reflect the image of the Indian who was standing in front of her in 1531!

Saint John Paul II visited the sanctuary twice, prostrating himself before the image, imploring her maternal assistance and invoking her as the Mother of the Americas.