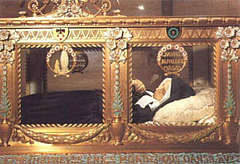 Born in Lourdes in 1844, Bernadette Soubirous was 14 when the Blessed Virgin Mary appeared to her at the Grotto of Massabielle. On July 7, 1866, following her desire for the religious life, Bernadette arrived in Saint Gildard, Mother House of the Congregation of the Sisters of Charity of Nevers (that she had known in the hospice of Lourdes).

For 13 years, Bernadette remained with this congregation. Her simple and ordinary life was completely dedicated to God and to others. At her death in 1879, her body was buried in a chapel in the garden. Found intact in 1909, it has rested since 1925 in a crystal coffin in the chapel of St Gildard.

Many pilgrims and tourists of all nationalities come to see Bernadette each year.