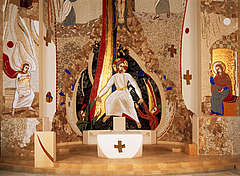 But we shouldn't trivialize this narrative.

Such a consensus arose because it is grounded in Scriptures:

The text in the singular is more ancient (papyrus found in the region of Alexandria, Egypt) and the most widespread (Irenaeus in Lyons, Justin in Rome...), and concerns Jesus.

Nonetheless, a version using the plural form became widely used. One can see in it the expression of the idea that Christians can become sons of God, virginally, like Jesus: they are reborn of God, by the Holy Spirit.

The expression "of blood"

The expression "of blood" is strange and occurs in four passages of the Bible: Leviticus 12:5-7, where the blood evokes the blood flow that accompanies childbirth; Ezekiel 16:6-9, where Israel is compared to a child that God rescues while he was amidst the blood, then washed and anoint with oil. In the above passages the blood is that of a normal delivery.

Luke 1:35 can be interpreted as: "The one to be born will be called the Son of God" and refer to the holiness of Leviticus, and in this case "to be born" means an immaculate birth in the ritual sense, exempt of any blood flow.

Like Fr. Father Ignazio de la Potterie, S.J., one can thus offer the following interpretation: At the time of his birth, Jesus did not cause a blood flow in his mother; it was therefore a virginal birth making the condemnation in Genesis 3:16, "In pain you will bring forth children," to be erased.

With the coming of the Messiah-Savior into the world, a new world order arises. There is a return to an admirable harmony of the beginnings.

This is not to say that Judaism had this intuition, but on the contrary, it seems that Christianity influenced Judaism in that respect. One finds the idea of a painless birth in Judaism only after Jesus Christ, during the Patristic period.

The virginal birth does not mean to depreciate sexuality, but it forms a sole and unique event with the virginal conception. Conception and childbirth correspond to the identity of Jesus who is the Son of God.

The Fathers of the Church, especially since the 4th and 5th centuries, made the connection between the virginal birth experienced by Mary and the Resurrection of the Lord:

a) Mary's womb remained "closed" during the birth, and the entrance of the risen Jesus in the Upper Room happened through "close doors" (Jn 20:19-26).

c) The Lord left the funeral wrappings in the same position as before (Jn 20:5-7). This is an image: the womb of the earth (the tomb), like the maternal womb, remain intact.

Jesus came out of his mother's womb miraculously.

After the Resurrection, the disciples must have wondered about the birth of Christ, and ask Mary his mother, still present in their community. The Paschal event is a totally new event. The community of disciples was Jewish, and possessed with a rigid sense of monotheism. They were dispirited after the death of Jesus and did not believe the women who said he had risen. It was the risen Christ in person who convinced them of his Resurrection and of his identity as the Son of God.

The virginal conception shaped Mary's faith: through it she was introduced into the depths of his divinity. This didn't prevent her from walking in faith and learning about who was that incarnate God, from suffering at the Crucifixion of her son Jesus and then hoping, in an act of faith, until Easter morning.