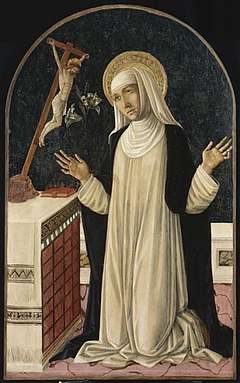 Catherine Benincasa was born in Siena, Italy and she died in Rome.

Born on March 25, 1347, Palm Sunday and also the feast of the Annunciation, Catherine lived by that double mystery. She called Mary "Sweet Mother" and plunged herself mystically in the blood of Jesus which saves and gives life to the sinner.

Consecrated, but not cloistered,

At the age of six, her heart was captured by Christ.

At seven, she made a vow of virginity, which earned her the persecution of her family.

At sixteen, she joined the Confraternity of the Penitents of Saint Dominic, called the "mantellate." Whether a widow or a virgin, these women remained celibate in their love of Christ and lead a life of prayer and penance, living in solidarity with each other but not in community.

Indeed, Catherine longed to give herself body and soul to God, not cloistered like a nun, but in the missions, like her "father" Saint Dominic.

At 18, while in prayer, she asked God, "Who am I?" She received a divine answer which would guide her life in a constant orientation illumined by the relationship between the finite and the infinite.

At 20, in 1367, probably on Fat Tuesday when she chose to pray while her family feasted, and after having repeatedly begged God to increase her faith, "Christ married her in the faith" during an apparition where the Virgin Mary and other saints were present.

She then felt called to leave the seclusion of her home and cared for the sick, helped the poor and sometimes even enriched them... with her own clothes.

At 26, ca. 1373, her public predications and peace negotiations began. A new family was formed around these activities—her "bella brigata"—an astonishing mix of men and women, religious and lay people of various backgrounds, nobles and humble people. They participated in her missions and entrusted themselves to her motherly love. In Tuscany, there were a dozen of them; in Avignon, twenty-two; in Rome, about thirty...

During the Great Schism...

In a bold move, she wrote to Pope Gregory XI, then residing in Avignon. It was a heated letter in which she urged him to return to Rome. She even went there to see him, and the pope did return to Rome in 1375. (Therefore the schism ended.)

When the pope died, a new pope, Urban VI, was elected in 1378. He was quickly contested by the cardinals, and some of them met to elect another one, Clement VII.

At 32, on her birthday (1379), she wrote a prayer on the Annunciation that is a theological and spiritual treasury.

At 33, in 1380, she died in Rome, without having seen the end of the Great Western Schism (which only ended in 1417 with the Council of Constance).

Doctor of the Church

Catherine of Siena was canonized in 1461 by Pope Pius II.

She was declared a Doctor of the Church by Pope Paul VI, on October 4, 1970, at the same time as Saint Teresa of Avila.

She was proclaimed the patron saint of Europe in 1999 by John Paul II.

Her writings and mystical impact

She spoke about personal conversion, civilian and ecclesiastical government reform, and of peace and solidarity with the Christian populations that were threatened in the Holy Land. 382 of her letters are still in existence.

Her Dialogue goes beyond the scope of her letters and has a universal significance.

A daughter of her time, she speaks to the heart of all troubled times: of discernment, prayer, Providence, and obedience.

"The spirituality of the saint of Siena manifested itself also by the gift of tears, the sign of a great sensitivity and tenderness. Many saints possessed that gift, which renews the very emotion of Jesus crying openly before the tomb of his friend Lazarus and sharing the sorrow of Martha and Mary...

Conscious of the failings of priests, Catherine had nevertheless a great respect for the ones who dispense through the sacraments and their predication the salvific power of Christ. She invited the priests and the pope, whom she called the "sweet Christ on earth," to be faithful to their responsibilities, by always loving the Church..."

(Excerpt from the Roman Martyrology)

Catherine teaches us discernment according to a criterion: the perspective of infinite union (Eastern Christians would speak of divinization).

Mary is very important because through her the Word became flesh. And the Word Incarnate reveals love's infinite dimension to humanity.