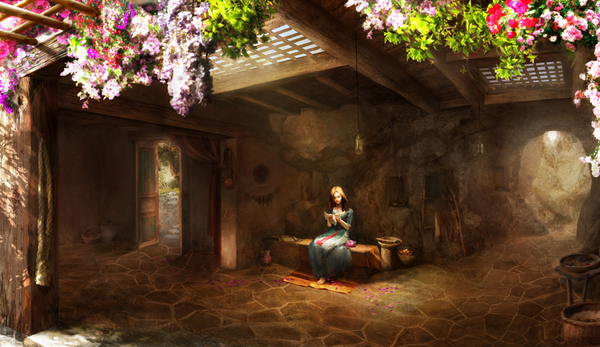 The section of “Life in Nazareth” is centered on the person of Jesus. The whole history of redemption unfolds around His coming into the world. The Blessed Mother is intimately associated with this divine design. She consented for Christ to be born and grow up in this Holy Family. This segment will focus particularly on the historical aspect of the Incarnation of Christ by showing in which way the Holy Family is a model for our spiritual life.

Nazareth - where Christ and the Holy Family lived

Nazareth: is the name of a unique place in history. This is where God became incarnate in the womb of a Virgin. There the Virgin Mary experienced the daily life of all mothers. Her life was humble and given over to God through her everyday activities: her house- and gardenwork, assisting Joseph, educating Jesus, praying as a family and at the synagogue, her social life and interaction with neighbors – similar to that of all mothers..

A life like that of all mothers…and yet her child was He who would become the Savior of the world! In Nazareth, where Mary and Joseph would mainly raise the Verb of God made man during the first thirty hidden years of his life, a whole spirituality of family life would arise: the simple spirituality of Nazareth would become a model to be followed.

Many archeological finds from the time of Christ, which have been discovered in Galilee as well as in the rest of Palestine, can help us imagine what their family-life was like concretely.  Similarly, some historians around Christ’s time refer to the existence of “Jesus the Nazarene” in Palestine under Tiberius, who was the Roman Emperor at the time, thus witnessing to the historical reality of the Gospels.

The faith of the Church: the Creed

The prayer or “symbol” of the Creed which we inherited from the Apostles and which we recite during mass every Sunday summarizes our faith. This prayer was formulated during the first ecumenical councils in the 4th century (Nicaea in 325, then Constantinople in 381). In the Nicene Creed, the Church reminds us how Jesus, the only Son of God, became incarnate for our salvation by the action of the Holy Spirit and the consent of the Virgin Mary.

Let us therefore discover the daily life of Mary of Nazareth, the concrete vestiges of its history and the spirituality of Nazareth….