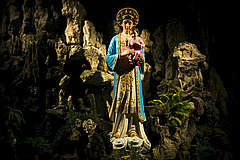 The history of this country can be traced back to 3000 BC. According to legend, the Hung dynasty had 18 kings, each of whom ruled for about 150 years. Their country, called Van Lang ("Land of the Tattooed Men"), is said to have included not only the Red River delta but also much of southern China. The last of the Hung kings was overthrown in 258 or 257 BC by a neighboring warlord, Thuc Phan.

Considering this ancient history, evangelization began late: Christianity was first recorded in the sixteenth century. There was a great persecution (1798-1801) and many Christians took refuge in the jungle near Quang Tri, 60 km from Hue. They suffered from hunger and thirst and prepared themselves for martyrdom. The reassurance that the Virgin Mary brought to them in their distress is the origin of the shrine of La Vang.

In 1802 the Nguyen Dynasty began, and in 1858 the French invaded the country. Vietnam's independence was gradually eroded by France in a series of military conquests from 1859 until 1885 when the entire country became part of French Indochina. In 1930 the Indochinese Communist Party was founded.

During World War II, the country was occupied by the Japanese. On November 20, 1946, the First Indochina War between the Viet Minh and the French forces ensued, lasting until July 20, 1954. The country was torn apart by the war, which ended with the defeat of the French and the partition the country between a Communist north and a market economy in the South. The president's refusal to hold elections became the pretext for the war in Vietnam involving U.S. forces (1959-1975). In 1979, Vietnam invaded Cambodia. Finally, the country implemented free-market reforms in 1986.

Christians are now a little less than 7% of the population. Among the painters of this country, Celso Le-Van-De depicted the Virgin Mary in a spiritual way, with simplicity and tenderness. Among the shrines, let us mention Bao-Ha Shrine, where Mary's intercession received a unexpected victory, and La Vang Shrine, the national shrine on the north and south border.